How to Welcome Failure For Spectacular Success 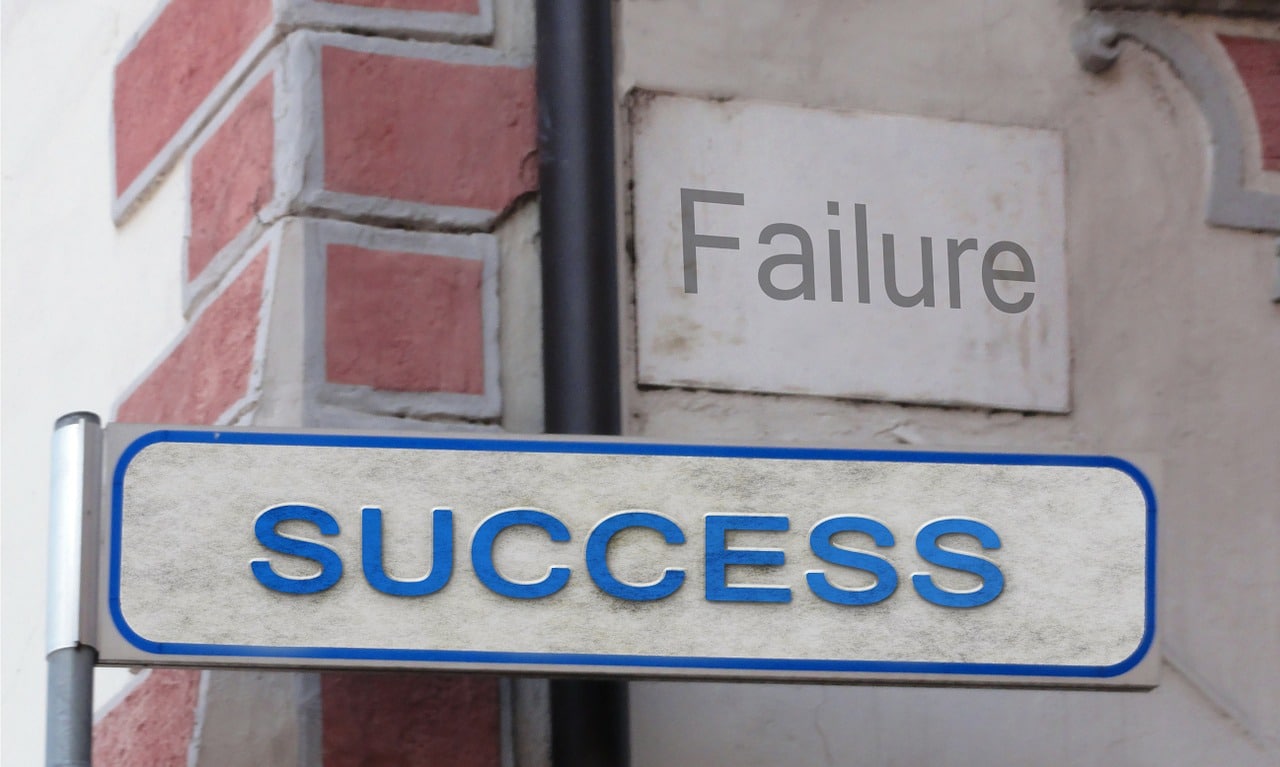 Michael Jordan says it best when talking about how failure is responsible for his success:

“I’ve missed more than 9000 shots in my career. I’ve lost almost 300 games. Twenty six times I’ve been trusted to take the game winning shot and missed. I’ve failed over and over and over again in my life. And that is why I succeed.”

While easier said than done, there is a precise method that enables failure to pave the way for success.  And for this to happen, you must deal with failure in a specific way.

Failure Is Not Enemy #1

Contrary to popular belief, failure is not enemy number one.  Both in business and in life failure is your friend when you know how to leverage its full power. Let’s take a step back and talk about what failure is and how we define it.

The dictionary defines failure as:

noun | failure
1.  an act or instance of failing or proving unsuccessful; lack of success
2.  nonperformance of something due, required or expected

Common examples of failure include:

Failure, losing or whatever you’d like to call it hurts.  It hurts a lot. Now here’s the interesting part.  At the exact intersection where failure meets pain, you have a choice.  You can either pack it in and move on, or, transform the temporary set back into a brilliant success.  Let me say that again.  Winners transform the pain of failure into spectacular success.

The former is where most people quit, and often to the delight of well-meaning friends and family.  People in your life may feel threatened when you have the opportunity to excel above them.  This is why I recommend you keep your goals to yourself or other like minded people.  The latter is far more difficult, but when knowing how to work with failure puts you in a league of your own.  And success will likely follow.

10 Questions to Transform Failure Into Success

If you’re looking for success, ask the right questions to get the right answers

Now I’ll let you in on a little-known secret.  Becoming an entrepreneur is an automatic enrolment you in the School of Hard Knocks.  Your ‘tuition’ takes the form of your time and failures.  You might as well learn from the lessons, otherwise known as your failures, that you’ve paid for.

I’ve developed ten power-packed questions to help transform your failure into massive success.  These questions also provide you insights and knowledge to find your blind spots.

The ten questions to transform failure into success are:

Let’s put the theory to the test. You’re in for a treat.  The next three entrepreneurs show you how they harnessed their failure into massive success.

From Failure to Success through Focus

Our first entrepreneur loves for formulas, algorithms, and human dynamics.  Our entrepreneur had visions of changing the world with an online dating site.  Unlike other dating sites, this one would find you a date, a roommate, and even a tennis partner!  Our entrepreneur poured his heart and soul into this venture.  There was just one problem.  The online dating since, known as SocialNet, bombed.  But out of the ashes, Reid Hoffman, took his lessons learned co-founded LinkedIn.

In an interview with Business Insider, Reid Hoffman said, “one of the things I learned from that whole experience, was that you should focus on one domain that really matters to people and just do that really well.”

Failure enabled Hoffman to create what is now the most successful professional networking site.  The sweet success for Hoffman was Microsoft purchasing LinkedIn for $26 billion.

From Failure to Success through Perseverance

Our next entrepreneur lost everything from the war.  In short order, our second entrepreneur worked his way to becoming a bank president.  Unfortunately, failure set in again when the bank failed.  Once again our entrepreneur was out of work.

War affects people in different ways.  The haunting image of men, women, and children lining up for food was all consuming.  The goal for our entrepreneur was to find a delicious food that is cheap, doesn’t spoil, and prepares in minutes.

For our entrepreneur, the answer was instant noodles.  Toiling away in his back shed, our entrepreneur had many failures.  From taste to preparation time to the life of the food, nothing worked.   And in an instant, everything changed.  It turns out frying instant noodles dehydrates them for a long shelf life.  Best of all, the dehydrated noodles cook in minutes after adding hot water.

Unfortunately, the first version of our entrepreneur’s noodles was expensive.  The next set back was drawing the attention of competitors who entered the market.  It was not until on an international trip that our entrepreneur found the answer.  Although it took five years to figure out the packaging, once he did, he never looked back.

You likely know our entrepreneur as ‘Mr. Noodle’ aka Momofuku Ando.  The next time you see someone enjoying a cup of instant noodles in a Styrofoam cup think of Ando.

Ando passed away at the age of ninety-six, but his creation of instant ramen noodles lives on. Worldwide sales for instant noodles reached 105 million units, according to the World Instant Noodle Association.  Put in another way, this is approximately 14 bowls for every person living per year!

In Ando’s words, “I came to understand that all of my failure—all of my shame—was like muscle added to my body.”

From Failure to Success Through Passion

For the next four years, our entrepreneur poured her passion into designs and dresses.  Everything changed with the 1994 Olympics which brought international attention to our entrepreneur.

Today Vera Wang is the designer of designers for bridal wear.  Wang has expanded into eyewear, fragrances and home products for the world to enjoy.

Not bad for an athlete whose dreams of going to the Olympics never materialized.

In the words of Wang, “All those years of skating and dancing have carried over. I can’t design anything without thinking of how a woman’s body will look and move when she’s wearing it.”

Failure is the Training Ground for Success

Second, these failures led to a massive success for their businesses.

LinkedIn was born out of the lesson to focus on one thing that mattered to people and to do it exceptionally well.  For Mr. Noodle, each failure added ‘entrepreneurial muscle.’  And finally, from the ice to a design house, knowing how a gown fits and moves on a woman’s body sets Vera Wang apart.

Early massive failures for our entrepreneurs gave them the training needed to claim success.  Taking it one step further, all three companies are successful because they failed.

For entrepreneurs, massive failure is the training ground for massive success.

How to Respond to Transform Failure Into Success

Unfortunately, social programming teaches you that failure is bad from an early age.  Our school system wears down kids who do not think or act in a certain way.  Society frowns upon you when you try something different or challenge the status quo.

As an entrepreneur,  look at failure as your friend.  Not an enemy. Easier said than done.   But know this: How you respond to failure determines if you’re an entrepreneur or wantrepreneur.

Let’s look at five key strategies to help you transform failure into success.

5 Key Strategies for Dealing with Failure

Your future success is waiting for you.  The only question is if you’re ready for it!  Know that as an entrepreneur you have what it takes to make a difference.  And most importantly, everything you need for your success is already within you, right now.  Here’s to you and your success!

Quote of the Day: “Be the type of person you want to meet.” Unknown

LinkedIn Co-Founder, Reid Hoffman, talks about launching the most important start-up … You!  Checkout ‘The Startup of You‘

Steve Jobs and his philosophy on failure

Why Success Without This ONE Thing Is Failure

How to Conquer Life and Success Through Your Stories

* Free Liquidity Event eBook
* Little known proven strategies
*  My 9-step roadmap that had me capture my 9-figure deal
* Your Fabulos Friday Weekly Email
I hate spam as much as you.  Your email is never shared.
« How to Focus On the Journey And Achieve Massive Success
Stop Wasting Time and Skyrocket Your Success »

Actually Useful Advice On The Differences Between Leaders And Managers

Do you know the differences between leaders and managers? Most business owners answer with a resounding “yes,” but reality says otherwise. Behind the success...

Enter Your Email Below to Unlock Your Exclusive Content
I hate spam and promise to keep your email address safe.
Close
Selling Your Business?
90% Of Liquidity Events Fail. Don't Become A Statistic!